Halloween, its history and modern-day celebrations 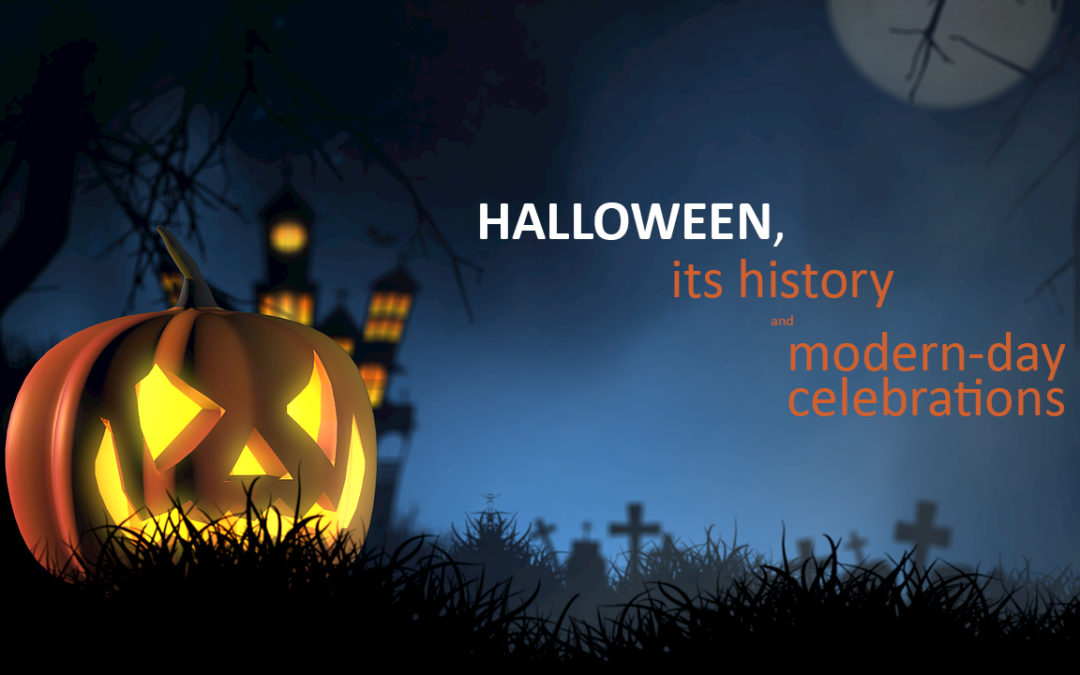 Every year on the 31st of October countries all over the world celebrate Halloween, a spooky celebration which usually involves fancy dress, scary costumes, fun games, and lots of (free) sweets! But its origins are a lot more interesting than that. In this article we will explore the traditions and folklore surrounding Halloween and how it has evolved into what it is today.

So where does Halloween originate from?

In Ireland, Halloween is a huge event that is celebrated everywhere in the country, as the holiday’s origins trace back to the country, it’s no wonder it is still such a widespread holiday in Ireland. Halloween can be traced back to an ancient Celtic festival called “Samhain”, during which people would light bonfires and wear costumes to ward off ghosts. This day meant the end of the summer and the harvest season and signified the beginning of the dark, cold winter, which was a period most often associated with death. The Celts believed that during Samhain the ghosts of the dead returned to Earth.

What do people do during Halloween?

Nowadays in Ireland, Halloween is a lot more fun and has a lot of its own Halloween traditions. While Halloween is predominantly a celebration meant for children, it is also very popular among young adults and adults alike. For children, this is a time to dress up as your favourite character, or to dress up as frighteningly as possible to scare your friends and family, go ‘trick or treating’ and try to fill your bag with delicious sweets. During Halloween people decorate their houses as scary and spooky as they can, some places even have friendly neighbourhood contests for the scariest house.

In both Ireland and the United States, trick or treating, which is when children dress up and go from house to house in their neighbourhoods knocking on doors and “scaring” their neighbours into giving them sweets. For adults, it is usually spent at costume parties, masquerade balls, or even horror houses, which have become quite popular recently.

Pumpkin carving is also a huge tradition that surrounds the holiday which also finds its origins entwined with the Celtic festival of Samhain. As folklore goes, there was once a man known as Stingy Jack, who tricked the devil himself for his own gain, when he died Jack was not allowed into heaven, nor hell, but was left to roam the Earth for eternity. In Ireland they began carving demonic faces into turnips in order to repel Jack’s soul, these eventually became pumpkin carvings and when Irish immigrants began to relocate to the United States these pumpkins became known as ‘Jack-o-lanterns’.

There are also various fun games and other traditions that are played and enjoyed during the celebrations, such as ‘apple bobbing’. Apple bobbing consists of a basin full of water with apples floating around, each player must try to catch an apple, using only their teeth and with their hands behind their backs, and get it to the table. Sometimes, the apples may have money inside and some have none.

Another Irish tradition surrounding Halloween is Bairín Breac, which is the traditional Halloween cake in Ireland. This cake is a fruit bread, but not just any! Bairín Breac is said to determine your fate for the year. It is baked with objects inside, each of these objects has a specific meaning that relates to the fate of the person for the year to come. It is usually cut and shared between family or friends. Each cake has the following; a piece of a rag, a coin, and a ring. The rag means that it will not be a good year financially, the coin represents a prosperous year, and if you get the ring it’s a sign of happiness and romance.

Hopefully this article has provided you with some insight into the holiday and festivities during Halloween, and maybe even inspire you to do your own thing this year! As you can imagine this holiday is always surrounded with fun and spooky stories, overindulging on sweets, and family time, but most of all unforgettable memories. This Sunday, why not try out some of these fun games and traditions and have an Irish-inspired Halloween.